Among the conferences I really wanted to attend this year was leweb in Paris. Though the theme of this year conference was SoLoMo(Social Local Mobile) but I believed it was a great atmosphere to present the power of 46elks platform to the participants. As I always mention to people, literally thousands of startups can be built based on SMS, Voice and MMS technology and we are happy as a cloud service to ease that process for the entrepreneurs and businesses so they can focus on their business development rather than technical stuff.

If you want to see great speakers and big names in the entrepreneurship world, You go to Leweb. You can easily sit in the front row of the scene on leather seats and enjoy listening to awesome people like karl Lagerfeld, Sean Parker, Shervin Pishevar, Eric Schmidt, Robert Scoble and many others. 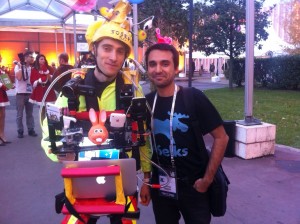 I was lucky to talk to Marissa mayer (VP of consumer products in Google) or talk to foursquare founder Dennis Crowley and as usual innovators with crazy ideas like this gentleman who has had lots of gadgets attached to him. Loic and Geraldine ( the organizers of the conference) had done great job to gather 3000 attendants and to invite great speakers. they know their job and when it comes to media and bloggers, they know how to make buzz. I am looking forward for the next year conference with 46elks booth to rock the house.

Let's have a chat

Did you find anything especially interesting about this post, or do you have feedback to us? We are always open for discussion and eager to hear your thoughts and ideas!